This simple stone building, set in a tranquil corner of Belper, dates from around 1250,

It was built by William de Ferrers, Earl of Derby,  who was lord of many  manors, including Belper, and who had castles at Tutbury and Duffield.

At that time Belper was a village in Duffield Frith, one of the many Royal Forests-hunting grounds for the Kings of Mediaeval England.

The Chapel saved the  foresters and their families a long walk to their Parish Church in Duffield.

When it was first built the Chapel was a plain rectangle, with no vestry, porch or bel-cote.

As it was not a parish church, baptisms, weddings and burials could not take place there, but still people must have compared it to their own insubstantial huts with wonder and pride.

Throughout  the next two or three centuries the Chapel was used by the people of Belper as the centre of their religious life, the services varying between Catholic, Anglican and Puritan as monarch, parliament and local magnates decreed.

It was a social centre of the community where families met every Sunday, news and gossip was exchanged, and official announcements from national and local rulers was read out.In 1634 the porch was built, and you can see the stone they used as the door lintel, with the data and the churchwardens initials on it.  This was later restored to its original use as the upright of a cross. You can also see the bell-cote which was added in 1699.

The late 18th century saw a great increase in the population of Belper, with the addition of mill-workers to the farmers and nailers of earlier years. The Chapel became almost a parish church, with baptisms in 1783, the font can still be seen and burials from 1793.

A wooden gallery was built in 1806 at the west end of the nave, you can see evidence of this on the outside walls. The vestry was added about the same time,  Further changes and extensions to the Chapel were precluded by the building of St Peter's Church as the main Anglican church in 1824.  The old Chapel was restored in 1870`s, the gallery was removed and the window openings rebuilt to their original shape.

The recent careful alterations have left the building looking as far as possible as it was centuries ago.

The original piscina and sedilia remain in the chancel, with the unusual self alter. The mediaeval priest's door is still there; and the new roof - beams of 1700 and 1704, with the chapel wardens name inscribed. Few visitors can wander outside or stand quiet in the nave without feeling a time - defying sense of companionship with the people of the past.

Back to top of Page 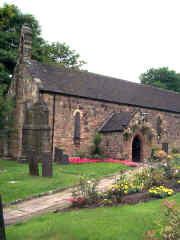